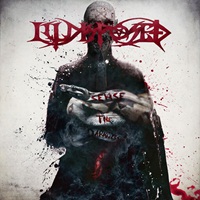 The twelfth studio album for Danish death metal veterans Illdisposed, “Sense The Darkness” shows no sign of weariness for the five-piece. Vocalist/ sub-woofer Bo Summer growls with intimidation and the Jakob Batten/ Ken Holst six string slingers deal out some nifty harmony leads on “Stop Running” and low tuned riffage on “Another Kingdom Dead” that may make zombies arise. Other songs like “Eyes Popping Out” and “Too Blind to See” are as uncompromising and as straightforward as you expect in a death metal band- piling riff after riveting riff, steady double bass and snare action, and the possessed demonic roars you know and love if you’ve been a fan of Illdisposed through the years.

Requisite knob twiddling expert Tue Madsen gives “Sense The Darkness” the right beefy, thick tones and keeps everything smooth- which isn’t as easy as it sounds for frantic, low tuned death metal. Bo’s natural word spew has a bit of that Barney Greenway snarl- yet he’s somehow a little more discernible, especially in the catchier tracks like “I Am Possessed” and one of the two bonus track digipack closers “Desire”. Illdisposed seem to mix up the tempos- they have occasional numbers that pick up the pacing to almost blast beat levels, but for the most part live for that mid-tempo, neck straining riff structure- material that makes crowds circle and bang fervently against one another.

While the last couple of Illdisposed albums experimented with slower tempos and slightly electronic/ modern sonic templates, you get the sense that Illdisposed were ready to return to their conventional death metal ways. Those into older Bolt Thrower with the noted Danish stomp will love “Sense The Darkness”- a great blue collar death metal effort.