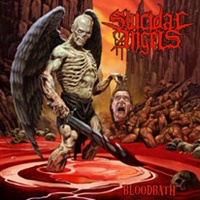 One of the new wave of European thrash acts to gain critical attention and veteran band appreciation would be this Greek band Suicidal Angels. Proving that slow and steady band development wins the race from their humble 2001 beginnings, guitarist/vocalist Nick Melissourgos started the group and slowly morphed his teenage school band dream into a serious outfit. Three demos in four years led to drummer Orfeas Tzortzopoulos joining and finally playing out live. Now settling in as a quartet and unleashing a series of studio albums, they’ve shared the good fortune to tour with Kreator, Death Angel, Exodus, Overkill, Bonded By Blood, and Belphegor among others to build up awareness of their swift sound.

“Bloodbath” is their fourth full length since 2007, and do not expect the quartet to be commercializing their sound anytime soon- as these 10 songs are relentless in their command of the thrash game plan. The basis for the band’s style seems firmly rooted in classic American thrash a la early “Bonded By Blood” Exodus and “Reign In Blood” period Slayer, along with a touch of the Brazilian band Sepultura (when they were a pure thrash act). Nick’s spitfire vocals give songs like “Morbid Intention To Kill” and “Moshing Crew” a clearer viewpoint into the band’s militant assault style- he’s not going to give you serene, sing along melodies as he’s out for blood. Orfeas has a love of Dave Lombardo’s dog pile tom fills amidst the 500 mph tempos on another favorite “Face Of God”, where Nick and Panos lay down some killer back and forth rhythms and whammy bar leads.

“Legacy Of Pain” at 3:31 gives the Suicidal Angels appreciator a slight reprieve, only in the sense that this slower effort will probably encourage more circle pits or stage diving action at their shows. The follow up “Torment Payback” features some of the best twin harmonies I’ve heard in quite some time, another adrenaline fueled offering that should prove that the band may have a retro-thrash knowledge base but they are seriously creating original material for the new thrash generation. Working with Mystic Prophecy main man R.D. Liapakis on the production proves that why break up a good team, and the scary Ed Repka art should give the youth a great front cover to enjoy and possibly purchase a poster of for their home walls.

Brilliant. Punishing. “Bloodbath” lives up to all expectations.

ARCHITECTS – The Here and Now