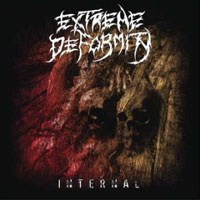 The death metal-band Extreme Deformity was formed in 1990 in Hungary and originally released their only full-length album “Internal” in 1993 on tape only. It hasn’t been released on CD until now. The 2011 CD-version contains a previous unreleased track together with their “Demo 1992”-release which actually is a rehearsal recording, although this review is going to be based on the tracks off of “Internal” only (which has been remastered for the CD edition). The band split up in 1995 and hasn’t reformed yet.

My first impression of the album is that it is quite generic death metal, which stuck after giving the record several attempts. There isn’t really anything special to pick up here and there’s no surprising parts to punch you in the face and put you on guard. The vocals are a bit too deep and monotonous for my liking. And the backing vocals such as on the second track “Forgotten Thoughts” sounds very amateurish, off key and weak. As the tracks have been remastered recently this is definitely something that should have been considered to be removed entirely from the record or at least fixed in some manner. On the upside the lead guitar reminds me of Chuck Schuldiner from time to time, both in phrasing and tone. Production-wise it got that definite old school death metal feeling. Dirty and raw, just as it should be.

So if you’re either one of those Hungarian metal maniacs or a just a general die hard death metal fan and you haven’t heard the album yet you should do something about it.