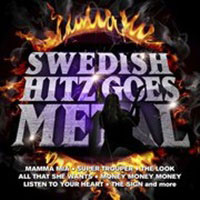 At the urging of Doolittle Group head Christian Liljegren, vocalist/guitarist Tommy ReinXeed, a 23 year old with an established neo-classical power/progressive metal pedigree, decided to record a cover album of Swedish pop/dance artists like Abba, Ace Of Base and Roxette with his own style. “The Look” ends up becoming a speed symphonic number, as does “Beautiful Life”, while “Money Money Money” is pretty close to the At Vance interpretation with a touch more keyboards. “Super Trooper” has more of a light hearted theatrical flair with the harmonized vocals, and “Joyride” is still a good time party song even with Tommy’s heavier guitars.

Some of these 14 songs work better than others- “Sleeping In My Car” is given a symphonic speed re-interpretation that doesn’t sit well with these ears, and closer “Listen To Your Heart” I think will always be a better song sung by a female than male… but overall, “Swedish Hitz Goes Metal” is a fresh concept that could appeal to the power/progressive brigade. Understand that Tommy’s naturally high propensity for the heavenly notes may be a deal breaker for some, but should be acceptable given the vocal prowess of the originators on display.

Ultimately, the song power wins me over. Be it pop or dance or rock or metal, a good song is a good song- and Swedish musicians through the years have had a great run because of their attention to detail and nuance for the hooks and melodies. Be prepared to see Tommy take a full band out on the road later this year and next to put these tracks in live clubs across the world.

BEFORE THE RAIN – Frail