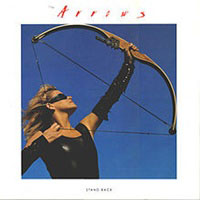 THE ARROWS – Stand Back (re-issue)

Canadian AOR band from the early 80’s, The Arrows released “Stand Back” in 1984 on A&M Records and had a minor hit with the first single “Meet Me In The Middle”. Sought after by collectors worldwide, Yesterrock got the rights to re-issue this 9 song effort. Very keyboard-oriented and melodic, The Arrows fit in line with others in their country like Corey Hart and Loverboy, especially with the catchy Rick Springfield-like vocals of Dean McTaggart and the driving nature of the arrangements, ready made for the radio back in the day.

The keyboards tend to take the hook lead musically, especially on a softer number like “Never Be Another One” that features a spirited sax solo a la “Urgent” from Foreigner or “Maneater” from Hall And Oates. “Girl In 313” could have easily been a part of the “Back To School” Rodney Dangerfield soundtrack, and “I Owe You” features those comfortable electric drums most expected from the nu-wave/rock crossover of that time.

Completely understandable how “Meet Me In The Middle” appealed to many consumers when it was first released as the single. Dean’s melodies are bright, the keyboards and guitars meld together to provide some back and forth happy comfort and once again a Huey Lewis-type sax solo keeps the pep in the arrangement step. Not surprising that co-producer, keyboardist and songwriter David Tyson would later be one of the co-writers for Alannah Myles’ chart topping smash “Black Velvet” a few years later.

For the softer AOR fans, “Stand Back” should stand in the company of Sheriff and the aforementioned Canadian artists for obvious talent and songwriting execution.