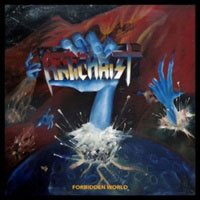 Starting in 2007 and recording two demos over the course of the next three years, it’s always good in today’s market to receive any ringing endorsement you can from metal musicians in the know – especially for a newcomer band like Antichrist. So most in the underground will perk up their ears as Darkthrone’s Fenriz has given this band a huge boost singing their praises in his internet column – which in turn pushed the band to create this 10 song debut album.

While other Swedish bands seem to be favoring traditional or Mercyful Fate influences in their current offerings, this five piece Antichrist live and breathe for the raw, unabashed primal elements of thrash. The stop/start riff transitions, the persistent pummeling snare and cymbal symbiosis, a low bass keeping the bottom end full and deep, then the Cyclone-like spitfire vocals from Anton Sunesson rising over the top of the music.

Bands like early Slayer, Possessed, Morbid Saint and even Venom come to mind when taking in blistering songs like “Victims Of The Blade”, “Torment In Hell”, and “Sign Of The Beast”. You’ll even get a long, epic 8 minute instrumental like “Minotaur” where guitarists Gabriel Forslund and Filip Runesson channel their best “Transylvania” meets “Losfer Words” licks, solos and double guitar harmony tricks on this Maiden meets Thin Lizzy roller coaster. Do not expect current production techniques on “Forbidden World” – this is primitive, recording it as a group and letting the results fall where they may just like in the early days of 80’s thrash.

Those who love the new school thrash movement will hate Antichrist. Others who miss “Seven Churches” and “Hell Awaits” will cherish the sounds of “Forbidden World”. I think this is vicious and vital – something most metal acts in 2011 need to deliver more.