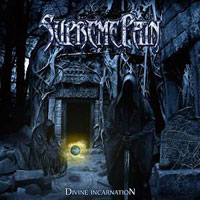 How do you define a perfect death metal album? Fine, you see the score before the review: how do you define a NEAR perfect death metal album? Well, it depends on how heavy, brutal and/or catchy and melodic you like it. As in all of metal everyone has different preferences. But it basically revolves around the concept of 4 elements: heaviness, catchiness, melody, variation. Some like it really heavy and not at all melodic, others vice versa and everything in various degrees in between.

As for me, I like it all, the lite, the brutal and the catchy, but when I want an optimal DEATH METAL album, it MUST be equally balanced: brutal enough to make me want to crank it up, catchy enough to keep me hooked, melodic enough to make me want to revisit it again and again and varied enough so that I don’t get bored with multiple spins. Originality and technical prowess, while important, are not central to me, as you will see later. In seeking a near perfect death metal album, I want to have all these major 4 elements present in the right proportions like the air I breathe.

Holland’s Supreme Pain’s (featuring ex-Sinister member) 3rd offering "Divine Incarnation" is such an album. It is catchy, varied, melodic and yet still very brutal, not recommended for your grandma, oh no. "DI" is as damn catchy as it is extreme, raw, sharp, pulverizing yet strangely accessible at the same time. It sticks in your head whilst killing a good portion of your brain cells as I am sure my dad would concur.

On top of it, theirs is one of the best productions I have ever heard on an extreme metal album: full, biting, groovy but savage as hell. I took the effort of researching who produced and recorded this near masterpiece so that next time I hear his name in reference to an album I’ll know that I am getting superb recording quality. His name is Joerg Uken and I predict we will all soon hear more about him if there’s any justice left in this fucked up world we live in. It ain’t easy: how do you record the sound so it’s brutal and primal but not over the top? Phenomenal job.

While guitars are primarily fast death metal, they often, pretty much in every track, burst into this dark catchy as shit EPIC melody that avoids pompousness of, well, epic stuff. I can think of one specific comparison to illustrate how well this is done – Monstrosity. If you haven’t picked up “Spiritual Apocalypse”, itself a PERFECT blend of death and thrash metal with these aforementioned solos and melodies, you are doing yourself a grave disservice as a metalhead.  Various tempos and climates are also entertained and the overall musicianship is top notch. It and “Divine Incarnation” is an astonishing, smart, tasteful blend of old and new school of death metal. Yes, Death and the Spirit of Chucky Schuldiner is everpresent on "DI" as well, most notably on the title track, think "Leprosy"/"Spiritual Healing" variety.

Every track changes tempos throughout so you don’t constantly get barraged with pure steel and get wary of the torture. This is often such classic stuff that if you call yourself a death metal fan and you don’t like this, then maybe death metal is not really your cup of coffee. It is one of those triumphs over the detractors who claim the genre is either dead (like the pathetic excuse for a human being Varg the Burzum) or dying. Plenty of Bay Area thrash metal quotes keep this far from stagnant, but even those are so deathmetalized, to an untrained ear these details may seem non-existent or at least undistinguishable from the regular death trip. It is the variety and inventiveness (check out that opening riff in “Divine Incarnation”, so mean) that makes this album and this band such a success in my eyes.

So – you ask – all these accolades and not a 6/6? What’s wrong? Well, the record does have a one tiny problem costing it a half a point: parts sound so much like Behemoth that if Nergal was filling in for SP’s vocalist, most people could confuse it for a Behemoth album. I hate to take even that much away from the score, because I love this record so much I want to take it behind the house and get it pregnant! If I got this CD as a 37th birthday present (yes, I’m an old fuck) it would be a great day regardless of whatever else would happen that day. But if I didn’t spare Ulcerate, neither will I this one. A reviewer without integrity is just some guy tapping on a keyboard with bloodshot eyes at midnight when he is supposed to be asleep to get up for work on time the next morning.

This small problem notwithstanding: Hail Supreme Pain! Fantastic job! I shudder to think if you dare to beat this one next time!