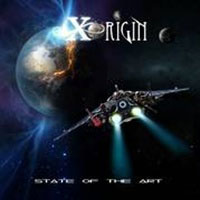 XORIGIN – State Of The Art

The Scandinavian connection of Swedish guitarist Daniel Palmqvist and Norwegian vocalist/keyboardist Johannes Stole comes together for Xorigin and the debut album “State Of The Art”. Meeting in 1999 in Los Angeles where the duo studied together at the same musicians institute, they kept in touch through the years while recording various projects. Producer/drummer Daniel Flores came into the picture and you get the chance to experience some more classic, vocal-led AOR with these 11 songs.

Right out of the gate “Can’t Keep Running” charges with a strong guitar riff and multi-part harmonies in the chorus like the self-titled Bad English debut, a good sign to catching people’s attention with this up tempo start. Yes circa “90125” and the mighty Giant come to mind most when taking in tracks like the enchanting “Said And Done”, the power ballad “In The Blink of An Eye” or “What Love Is All About” where Johannes showcases his playful spirit and commanding voice. The band understand that to be a great act in this genre, you can’t gravitate to one particular tempo or standard chorus – so Xorigin are willing to fluctuate between the mid-tempo anthems, the up beat rockers and the occasional, emotional laden slow number. And what album wouldn’t be complete without a female named track like “Gina” – the keyboard parts pulsating as Daniel’s drumming gives this song more of a Winger appeal.

With many of the veterans either retiring from the scene or reluctant to put forth new studio albums as the fans clamor for their classic catalog hits, now is the time for pure melodic rock and AOR fans to dig deeper into the burgeoning movement with these newer bands. I’m hopeful that this will not be a mere studio project act and that Daniel and Johannes will fill this out with a full, viable touring band. There’s just enough bite in the guitars to have this group appeal to a varied fan base- once again a win for the world!

ETERNAL GRAY – Your Gods, My Enemies