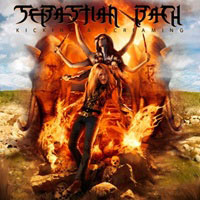 The powerhouse voice of Sebastian Bach has little to prove to the hard rock/heavy metal community in terms of his commitment to the cause. When other musicians may have gone softer, he only returns stronger. “Kicking & Screaming” is the follow up to 2007’s “Angel Down”, and his latest guitar acquisition Nick Sterling is a 21 year old wunderkind who has been recording since the age of 10 – so prepare to have your ears and face blown away by these 13 explosive songs.

The rhythm section of bassist Rob Deluca and drummer Bobby Jarzombek are as tight and competent of a duo as you will see wielding a four string or a set of drum sticks in the business. Their energy and tempo versatility runs the gamut from straight ahead metal numbers like “My Own Worst Enemy” and “Dance On Your Grave” to the more conventional, classic rock arrangements such as “As Long As I Got The Music” and “Live The Life”. Nick’s axe knowledge, emotional depth, and chemistry in co-writing with Sebastian is the right lift off for people who’ve missed where Skid Row could have gone following “Slave To The Grind”. The man can wield some captivating acoustic parts as well in “Dream Forever” – interjecting the right give and take with the electric aggressiveness to make a Sebastian Bach ballad unlike the normative sappy, contrived song.

Sebastian still has one of the best pure hard rock voices and ranges of all time. It’s as if with age comes more wisdom in knowing how to belt it out, when to hold back, and really reach the core of emotional connection with every lyric. Some of his best work on the album comes on the low tuned boogie shuffle within “One Good Reason” as well the opening title cut which serves as the first video from the record.

We know a reunion of Skid Row will happen when time travel transportation becomes in vogue for pigs and other barnyard animals. Who cares though when Sebastian delivers such a fun, raucous hard rock/metal record as “Kicking & Screaming” – proof that the veterans of the business still have plenty of creativity left in their tanks.

A VANISHING SELF – Mirrors