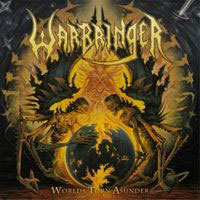 The American shredders in Warbringer are finally ready with their third album. Fans have waited over 2 years for the world to be torn asunder and Earth never stood a chance. Pushing the throttle way to the floor, the album hits you harder than three tons of bricks getting thrown in your face. The opening trio of “Living Weapon”, “Shattered Like Glass” and “Wake Up… Destroy”, the latter leaving a lasting impression on your neck muscles, really sets the mood for whats to come.

As the album thunders on with tracks like “Savagery” and “Echoes From The Void”, it becomes clear that “Worlds Torn Asunder” displays a more thought out structure than Warbringer’s debut album “War Without End” (2008). Keeping that edgy rawness, which Warbringer has embraced as their own sound but adding on some more fine tuned production they might come off as more commercially acceptable without loosing their ever growing fanbase.

The albums tucks itself in with the calm instrumental “Behind The Veils of Night” before awakening once more for one final stroll in the midnight air to the sounds of “Demonic Ecstasy”. When the 12 track power display by the American five-piece draws to a close any true metal head will be left with a throbbing head-ache, a tad distorted reality and some serious trouble moving around without looking completely thrashed.