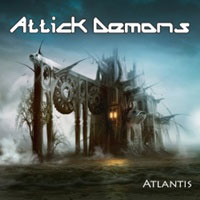 This Portugal traditional metal sextet finally releases their first album “Atlantis” after 15 years as a group. Earlier in the 2000’s they released a self titled EP and six years later a demo of the same name as this album – but you can tell they haven’t been idling their time away. Guest stars include ex-Iron Maiden vocalist Paul Di’Anno and guitarist Ross The Boss on the title track – so I think you can expect pure sounds and adherence to all that was glorious in the 80’s UK/ USA metal movement.

Overall these 9 songs are where Iron Maiden should be with their style these days: pumping out the guitar harmonies, energetic riffs and lifted to the heavens vocal presence. Drummer Goncalo Pais isn’t afraid to shuffle his double bass feet and also stick his neck out for some different tom rolls and fills on hook-laden songs such as “Back In Time” and “The Flame Of Eternal Knowledge”. The use of three guitarists gives Attick Demons the chance to thrust the rhythm behind normal single or dual axe lines – just increasing the heaviness and memorable factor on the title track and “Riding The Storm” to relive the exciting years of 1982-1986 where acts weren’t afraid to trade off licks and solos in rapid fire succession.

Artur Almeida not only could be related to Bruce Dickinson, he really is the long lost twin stand in vocally. In terms of inflection, power, confidence, and breadth of melody knowledge, he can glide comfortable through a more dramatic track like “Sacrifice” where he uses all parts of his range convincingly- then amps up the lung capacity on the more up tempo “City Of Golden Gates” which wouldn’t be far off the “Chemical Wedding” solo days of Bruce Dickinson.

Every country I believe has that one band who could rally the troops for a true, traditional revival. Attick Demons have an outstanding platform with “Atlantis” – let’s hope the next album doesn’t take until 2026 to hit the market place.