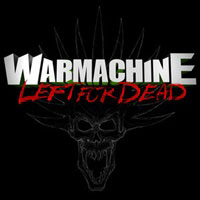 I’ve been following this Canadian classic traditional metal band with power and thrash nuances since early 2001, when hearing a 3 song demo that blew me away at a time where a lot of the newer bands didn’t seem to have that fire and brimstone to achieve something. 5 years later their debut album “Beginning Of The End” made a buzz on the scene, and in the ensuing years they’ve played numerous shows in Canada and abroad, including a 2010 US touring stint with W.A.S.P. no less. Bassist Alberto Campuzano also got the chance to tour Europe with Annihilator, so it’s no surprise that we’ve had to wait another 5 years for the second album “Left For Dead” to finally be released.

How does this quartet stand out from the others playing meat and potatoes mid paced to slightly energetic traditional power metal? Within the first minute of opener “Moving On”, the main and harmony vocals from guitarist Joe Di Taranto tell the story – warm, inviting and with that slight King’s X meets Into Eternity against AOR feel, Warmachine just know how to capture your attention not just with strong riffing, timing and arrangements. Other songs contain those rich soothing twin guitar lines that remind me of many European brethren like Accept, Iron Maiden or possibly latter day American act Riot – “Chalk Lines And Bones” being the classic example of those hooks, while the follow up “Alive” flashes a little bit of their technical knowledge as the high melodies match the musical muscular bite.

This is a sadly underrated style of metal that doesn’t gain nearly enough attention and fan following. Much like Metal Church, Armored Saint and bands of that netherworld, some would consider Warmachine not extreme enough or possibly too commercial for their ears and eyes to hold their interest. My favorites include the medieval marching template “Too Late” complete with one of those bluesy, Kirk Hammett like solo motifs and closer “A New Beginning” that assuredly gets the live crowds abuzz.

One hopes we can get more than another album quicker from Warmachine as their talent level and ability deserves more appreciation from all corners of the globe.