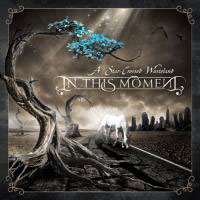 IN THIS MOMENT – A Star-Crossed Wasteland

Expectations is a major part of the music industry. Looking at a album cover, reading the title and artist/band name will in most cases give you some indication to what you might expect from the album. “A Star-Crossed Wasteland” by In This Moment would lead most people to expect some form of progressive metal, perhaps along the lines of Dream Theater and alike. This album however will leave your expectations as a cloud of dust in the road outlying where it used to be.

The opening track “Gunshow” hits you like a sledgehammer to the chest with rock solid metalcore. It continues with “Just Drive”, making it a powerful duo opening “A Star-Crossed Wasteland”. The continuation on the other hand never lives up the initial shock opening. Conforming to every expectation one might expect from a modern day metalcore band the tracks drifts along with a watered down recipe of calm vocals and screeching growls, the brutality fading more and more as the album moves towards the middle section of the track listing.

Whatever original album expectations you might still clinch to in the hopes of a progressive masterpiece disappears completely with the lyrics. Tracks such as “The Promise” and “Standing Alone”, concentrating on personal anguish and getting hurt/hurting others, would get some to reach for the overused ‘emo’ stamp, however that would be a bit hasty and quite harsh in a overall sense. Songs like “The Road” is more about hope and moving on rather than personal punishment. “Gunshow”, “Blazin’” and “Just Drive” are awesomely intriguing, sure to get most metal heads banging their heads and singing along to the chorus. The title track “A Star-Crossed Wasteland” is a ballad offering a painfully mainstream effort by the band with beautiful vocals by lead singer Maria Brink and a piano based foundation. The track being proceeded by a return to form with “Blazin’”, a powerful metal anthem similar to the opening track “Gunshow”. The album closes off as a complete 180 in contrast to the opening track with yet another agonizingly mainstream effort by In This Moment with the song “World In Flames”.

So how does it all add up? With a little bit of everything metal wise the album is sure to satisfy fans of metalcore, partly offer some satisfaction to heavy metal/alternative metal fans and even offer a few tracks to those looking for some smooth , radio friendly tracks. “A Star-Crossed Wasteland” offers no original thought music wise, it copies basically everything else that’s musically popular nowadays but somehow manages to do so in an engaging way. It is well worth a listen!

THUNDERBLAST – Invaders From Another World