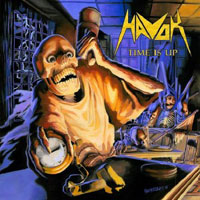 HAVOK – Time is Up

Thrash metal is just as hot as the 80’s and there’s a whole bunch of bands out there in the big world trying to break out. So-called modern thrash has gained a foothold in central Europe, while in Scandinavia and the U.S. the bands are mainly inspired by the Bay Area scene. Some crossover band has some success, but this to a lesser extent.

One of those American bands that swear to the true thrash metal is the Colorado-based thrashers Havok. "Time Is Up" is their second album and here you get fast riffs, driving bass lines, pounding screams, harsh transitions and heavy riff-based sections  – all served with a modern sound added a little touch of the old from the first half of the 80ies.

Personally I find my favorites in "No Amnesty" and in the subsequent song, "DOA," but this is obviously just a matter of taste. There are many good songs here and the album is straight through wonderful. Now it’s time for beer. Cheers.