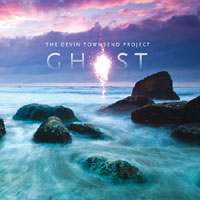 So "Ghost" and "Deconstruction" signal the circle completing for Devin Townsend and his comeback of sorts. Not that he had really suffered anything like a career decline but his ‘retiring’ from the public eye, particularly as far as touring (or lack of touring) goes and the promise he made that it was to be more of a slippers and pipe lifestyle rather than one of sex and drugs, seemed to indicate that life of his was heading towards something more settled. "Addicted" changed that, it really took folk by storm and raised anticipation for the two aforementioned albums.

When the time came and I finally heard it, "Ghost" took me by surprise due to it’s similarity to "Ki" (the album preceding "Addicted" and the first in this four album cycle). Now before the Devin devotees blow a fuse condemning such an obvious but inaccurate comparison I must point out that I realise musically they are not bedfellows but as far as aura, vibe and all that sorta jazz goes…well, they are cousins.

Yes, the "Ki" comparison stands but in a very complimentary manner for it should be noted that "Ghost" shows, to me anyway, that if I have understood his aim for the listener’s experience with this platter, a rather noted improvement in expression and aural achievement. However this album does meander slightly in places and could possibly do with a little snipping. Why the high mark then? Well simply because Townsend has crafted quite a special album here. When he hits the spot it is a dead centred bullseye.

"Feather"  at song number three is where I was captured and by the time "Ghost" and "Blackberry" has passed I was truly taken in. "Blackberry" in particular – what a song. Beginning as if it could very well be a lifted from the 16 Horsepower archives it quickly takes a very different path to being an unquestionable highlight. On the other hand "Monsoon" is less a ‘song’ and more of a mood piece yet is remarkably effective especially when considered as an element of the album rather than a standalone piece.

Actually "Moonsoon" being mentioned above is actually quite perfect for leading to two other tracks that highlight the two most glaring points for me if I must pick actual criticisms verses praise for the album, made all the more interesting because I would have expected something quite the opposite. The criticism/praise? OK –
with "Monsoon" described as a mood piece, I feel compelled to mention "Infinite Ocean". Not much happens in the conventional sense during the course of this song, in fact it is  probably  what some would consider boring yet for me it is a good example of what I imagine Townsend is attempting to achieve in theory when he began with this album or it’s concept/goal. The eight minutes are surprisingly brief with the music’s soothing hue properly capturing you and proving to be a remarkably relaxing journey.

On the other hand "Texada" is more of the ‘song’ approach, closer to ten minutes long, it starts brilliantly and really feels it is becoming almost one of the album’s sure fire peaks – as it is I suppose anyway – yet somehow it manages to lose me (at least) from it’s grip and drop the ball. How? Not sure how exactly but it does and hindsight notes how the smart money would nearly always have been on "Monsoon" with it’s lack of musical drama to be the likely candidate as number two choice between these songs. "Texada", as stated, begins so, so well but doesn’t quite follow through I feel.

Regardless, if for nothing else than sheer command of versatility the man deserves all his praise and more. The four album set was a tall order even before it began yet Townsend has proven himself masterful in execution. What are you waiting for?

…read the review of its stormy counterpart here…