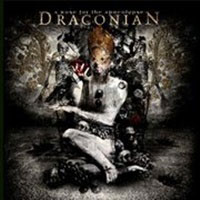 DRACONIAN – A Rose For The Apocalypse

Sweden’s Draconian release their fourth album “A Rose For The Apocalypse” – and the six piece feel content in their gothic doom metal leanings. What allows this band to stick out amongst the masses is their distinct ability to keep the emphasis squarely on heaviness – the bulk of the riffing and parts are total classic doom reference points and the gothic flavoring comes into play with much of the extra layers of guitars as well as the female siren vocals from Lisa Johansson.

The roots of this act lie in a melodic heavy/death metal band called Kerberos in the mid 1990’s, and you still hear some of this sound through male death vocalist Anders Jacobsson – his menacing growls perfect for the darker and faster sections of songs like “End Of The Rope” and “Dead World Assembly”. Guitarists Johan Ericson and David Arvidsson whirl around a bevy of Paradise Lost-like passages and then turn on a dime with slower, Candlemass appeal on standout material such as the hypnotic “Elysian Night” or the deep and mysterious closer “Wall Of Sighs”.

There are times when Draconian lift out of the slower tempos and entertain with more spirited rhythms- evidenced by the opening riffs in “The Drowning Age” or the acoustic/ spoken word leaning in the bridge for “The Death Of Hours”. Fascination Street Studios (Katatonia, Opeth) once again brings vitality to Draconian’s melancholic arrangements, as there’s a sense of serenity when the slower somberness streams into your soul.

Put away your notions that every gothic-leaning metal act washes your brain out with pop melodies or a sea of keyboards and enjoy “A Rose For The Apocalypse”. Long time Draconian listeners will not waver in their adulation for this band’s records – and I believe this could add a few new converts to the fold. Spare a few hours and curl up with this outstanding release.