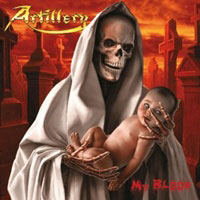 A certain tier of thrash acts put more emphasis on musicality than sheer punishment in the early stages of the movement. Denmark’s Artillery would be one of those bands known for their special brand of catchy, energetic riffing – in a manner much like Heathen or Znowhite/Cyclone Temple for comparison’s sake. After a break up, a reunion, and then more significant downtime, this version of Artillery contains a new vocalist Soren Adamsen along with the classic core of guitarists Michael and Morten Stutzer, bassist Peter Thorslund and drummer Carsten N. Nielsen. “My Blood” is the next chapter in Artillery, and its another worthwhile, ear pinning exercise in veteran skill and tact.

Let’s start with Soren. He doesn’t shriek or grumble through these 11 songs – his melodies are more traditional in nature and I feel his bellow mirrors the best Russ Anderson / Forbidden times on songs like “Dark Days” and “Ain’t Giving In”. The Stutzer axe brothers appear to inject an Oriental meets Egyptian phrasing influence prominently for “Mi Sangre (The Blood Song)” and “Monster ”- but haven’t forsaken the triplets and speed parts for a wild rollercoaster arrangement like “Death Is An Illusion”. When they take off the distortion and play clean or acoustically it possesses that dark Metal Church quality that separates Artillery from the conventional thrash n bash troop. Metallica wish they could write a song in 2011 like “Warrior Blood” – one with large background vocals, well thought out lead parts and a potent Carsten drum pattern with nice transitions and perfect fill placement.

Ladies and gentlemen, Artillery know thrash metal can and should have dynamics along with thought provoking cover art and the best production money (and time) can offer in order to ensure total immersion into the fold. They may not get accolades for their stronger songwriting orientation, but one hopes “My Blood” will finally get them a wider fan base that they deserve.

IN SOLITUDE – The World. The Flesh. The Devil