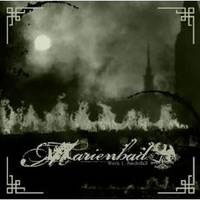 The first thing I thought after having listened to this album is that, apparently there are German poets still – but they are all in the east! The Thuringian band Marienbad is a side-project of several Eisregen members who play what their label calls Doom/Epic metal, but is best described as somewhat similar to the slower Eisregen songs. Bleak guitars and somewhat unsurprising drums are accentuated by contained vocals which later on reveal a certain depth rarely heard within the genre. Hammond chords underline the music while piano and flute (!) are often used as main melodic elements (which is something I wished for for quite some time, metal and flute).

The most notable element here is the interplay of the vocals and the narrative, which is superb! Lyrically, the band manage to sing in German which sounds neither like Denglish (German mixed with English), nor like compulsively (therefore ridiculous) medieval, a feat that from my point of view, only Rammstein have managed so far…

The vocals switch from cleanly sung to whispers and typical Eisregen screeching. This corresponds to different narrators of the individual stories, which is especially notable in the second piece, "Roslins Fluch". The title is about unfulfilled love with a gruesome end. The vocals start out yearningly, become hopeful (not really leaving melancholia) and towards the end, when the viciousness starts, you will notice, whether you speak German or not. One of the more emotional moments in metal.

I could write a whole essay on the lyrics here, so take a look at them, deep stuff and – relatable!

The record has been released in both a German and an English version. I have intentionally only listened to the German version and believe that this is the definite one to listen to. If you have ever been to East Germany, you may remember quiet, somewhat disturbing little towns with suspicious inhabitants and a somehow depressing atmosphere overall. (Watch the movie Rotenburg to get a feel of what I mean). The fictional town of Marienbad seems to have the same vibe, the more believable for the subtle accent the vocalist has. It would have been a shame to withhold the lyrics from the English-speaking audience, which warrants the English version.

There are some faults here though: The melodies and music in general seldom seem repetitive, and some lyrical themes reappear almost verbatim, suggesting a lack of ideas. Also, I don’t understand why, of all songs, "Flammnacht", the least representative of the whole album, was chosen as de-facto single. "Flammnacht" sounds more like Eisregen than anything, get a feel for the album by listening to "Roslin’s Fluch" or "Unter Dammkrone".

All in all, this is a round release of original, melancholic doom metal that no metalhead, especially those interested in German vocals, should miss. Two songs less would have meant one point more, but this way I am looking forward to the next release in this concept series.