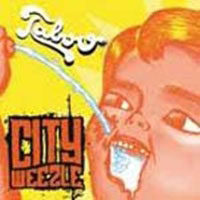 Sometimes you just have to escape from reality…

Sometimes you want music to mellow you out, make you rage, produce tears of happiness and sorrow, take every fiber of your being and rearrange all the parts.

I can only imagine where the men who created “Taboo” came from in their childhood to make such a left field heavy rock record.

If Primus, Frank Zappa, Mr. Bungle and .22 rotate in and out of your stereo, along with occasional guitar runs that would make the Allman Brothers giddy with glee floats your motorboat, City Weezle deserve more than a casual glance. The title track features a bass/ clarinet synchronized jam and Simon Fleury’s neurotic, rhythmic word patterns that border on certifiably insane asylum while the Maxime Gibon/ Ai Uchida backbeat section just throws down the most stair step maze parts that keep every passing listen invigorating. “Abuse” is a slower 5:33 effort reminiscent of a doom crawl when you fear facing the day, only to encounter a succession of random sights and sounds you struggle to make sense of yet capture every brain cell for the rest of time’s existence. “Nimformation” contains ska parts a la Mighty Mighty Bosstones or Madness and then rolls right into an old 50’s doo wop song right in the next 4 bar measure – yet seamless it all makes sense within the band’s context.

They describe their sound as swinging, grooving rock with a sharp punky edge. All I know is with these 12 songs, the outcasts and forward thinkers will go bonkers over City Weezle. No one in their right mind will understand “Taboo”. It’s challenging, it’s mind bending, it’s eclectic, and everything people who like simplicity in their music can’t stand.