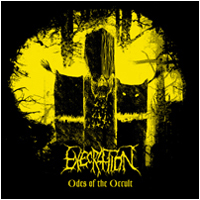 EXECRATION – Odes Of The Occult

Ok, so you have Autopsy and the youngsters Obliteration doing dirty death metal with heavy riffing. Then you have the thousands of clean and technical bands with albums that are quite impressive, yet leave you quite dead inside. And you have all these boring unimpressive bands with growling vocals, bands that do nothing but duplicating what has been done over and over again.

And now, with Execration’s second full-lenght "Odes Of The Occult", death metal from Norway once again prove that Norway is far from only black metal or A-Ha. This album is very dirty, very heavy, deadly and contains many a great moment. And what impresses me much, is that despite all those millions of death metal albums that have been release the last 30 years, there are still a handful of bands that have the curse. Portal, Obliteration, Ascension (death black metal), Necros Christos… …and now Execration. Another aspect is that the album is very varied, yet the feeling of being stuck in the same shitty mud is ever present.

Execration’s dirty mug of alcohol is of course not for the hi-fi dudes. "Odes Of The Occult" is an album that demands something from the listener. You have to spend some time, getting to know the material that lurks behind the heavy guitars, the drums and the almost gory vocals. Vocals, yes… Why does one old-school Chuck Schuldiner comes to mind? Perhaps because "Leprosy" is one of the best death metal albums ever… "Odes Of The Occult" may end up as one high up there in time. For now it is one hell of a death metal platter from another Norwegian band that has this feeling of paying tribute to times of old (late 80-ies) yet bringing in the new flesh and identity. If you’re not really sure, check the midsection on "Entheogen", the "Intermezzo II" part and the beginning of "A Crutch For Consolation". But mostly "Odes To The Occult" is death metal, filthy and fucking raw!