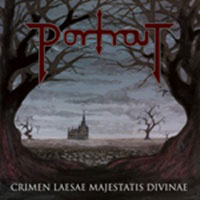 The Swedish metal juggernaut continues with the five piece Portrait – who release this second album “Crimen Laesae Majestatis Divinae” on Metal Blade Records, after a successful debut release on German underground label Iron Kodex in 2008. Per Karlsson took over on vocals in support of that first record, so not given the chance to take in said effort I will base my opinions solely on these eight songs.

Musically Portrait have much in common with the fervent 80’s traditional and power movements – the riffs possessing an epic, marching charge like old Manowar, Omen and Mercyful Fate with the solo tendencies of classic Iron Maiden and a rhythm section built for head banging action. Songs such as “Darkness Forever” and “Beast Of Fire” dance and dazzle with boatloads of guitar salvo parts, giving drummer Anders Persson ample chance to flex his steady tempo changes and dexterous double bass play. The production values an old school analog touch – it’s as if Portrait all decided to tackle this record with a live to tape studio atmosphere.

And what can be said about Per’s range? The man certainly lives to shatter ears and take no prisoners with his higher shrieks and Halford meets paint melting screech predication. For the most part it matches the high octane music output – and also keys in on King Diamond during a mid-tempo effort like “Infinite Descension” where he goes up and down much like the horror master. Overall I sense he could be a make or break vocalist in terms of the casual versus ardent Portrait maniac.

Guitar players will have plenty to sink their chops into, as Richard Lagergren and Christian Lindell spit out dual and individual riff hooks that keep the proceedings exciting and meaty all the same. Check out “Bloodbath” for old school Armored Saint/ Flotsam and Jetsam speed riffs against Iron Maiden / Mercyful Fate harmonies and you’ll understand where the air guitarist may come out of the closet.

It’s been a while since Metal Blade focused on a true old school act – but Portrait are worth every minute of time to track down, as it’s making me relive my youth again.