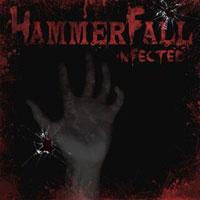 Back when America spent a major part of the 90’s reinventing what ‘heavy’ music was really about, many younger European artists influenced by the early 80’s traditional/ NWOBHM movement began a resurgence in the look, attitude and force of classic metal. There may have been glimmers of hope thriving from the veterans, but the debut album from Sweden’s Hammerfall “Glory To The Brave” in 1997 got the buzz going in all four corners of the globe for twin guitar harmonies, soaring vocal melodies and a sense of camaraderie sorely lacking for years while metal appeared in a state of flux.

In their six subsequent studio releases (seven if you count the “Masterpieces” all covers effort, but I consider it more of a compilation with three additional covers tacked on for the collectors) they have stuck to a similar formula of high energy, double bass driven numbers, the crowd pleasing mid-tempo anthems that evoke audience sing-a-longs and the occasional tender ballad to give everyone a breather (or a teary eye). The early street rumors are out that “Infected” finally shows Joacim, Oscar and the boys expanding their arrangement horizons and bursting with newfound vigor.

Maybe the benefit of recording in Göteborg, Sweden and Nashville, Tennessee gives these 11 songs a kick in the gut to move Hammerfall back to the forefront of traditional metal. You’ve got Randy Rhoads meets Whitesnake inspired riffs that lift “Bang Your Head” to certain set charmer status, the conventional “Dia De Los Muertos” with the Helloween harmonic twists and Anders Johansson’s persistent double bass pumping up the tempo, and the sparse acoustic-laden ballad “Send Me A Sign” which gives Joacim Cans his spotlight with an emotional, low to high range heart-felt delivery. “One More Time” just screams for rhythmic spasmodic episodes, the drums and vocals often in unison- while “Let’s Get It On” contains a lot of the classic Maiden-isms with galloping parts and dual harmonies.

There are still a couple of aspects that Hammerfall veer into inconceivable waters. “666 – The Enemy Within” contains too much uplifting keyboard atmosphere and a chorus that befits Queensryche more than the devil’s number in the title, and “I Refuse” owes more than a modicum of influence from the LA Sunset Strip scene, as I hear Dokken and Warrant all over this number. However, the great outweighs the laugh out loud moments by a five to one ratio – which is more than I can say for “Renegade” from their back catalog.

Bottom line? This isn’t your old Hammerfall coasting anymore on their early success laurels. It’s not as exciting as Wolf or Enforcer for my tastes – but I’m willing to say “Infected” does showcase the band’s talent and songwriting depth, proving they aren’t a one trick pony.

SATOR – Under The Radar