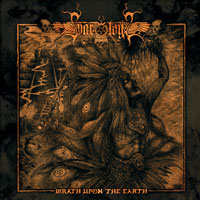 SVARTSYN – Wrath Upon the Earth

Bands like Svartsyn need a bit of an introduction. Svartsyn has always been there, lurking in the shadows, releasing an album when we least expect it. Through the years there’s been the core of Ornias & Draugen but on "Wrath Upon the Earth" things are different. Draugen has left and Ornias has recruited two members of Belgian based band Satyrus, Zoran Van Bellemgem & Baruch Van Bellegem to the fold, turning Svartsyn into an unholy trinity.

Chaos surrounds Svartsyn’s sixth album and there are times when you wonder if Ornias’ chaotic brand of Black Metal is really going somewhere. There are parts here that will drive fans of minimalistic Black Metal away in a hurry. Don’t expect anything catering to that crowd here. This one’s about flexing the fingers for Master Satan. Rapid tempo changes, drawn out parts, you’ll find it all here.