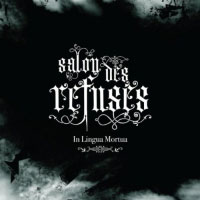 Norway is the promised land of the so called avantgarde black metal movement. Nowadays it actually seems that it’s harder to find traditional black metal from Norway than some kind of a weird jazz-pop-electronic-you-name-it influenced stuff.

In Lingua Mortua was formed in 1999 but "Salon des Refusés" is just their second full-lenght album. Even though I’ve never heard their widely acclaimed "Bellowing Seas – Racked by Tempest" debut, I was firmly convinced of these guys’ ability to create something unique. For once I was right!

In Lingua Mortua’s members have strong metal background in bands like Angst Skvadron, Ásmegin, Kvist and Urgehal. Actually ILM doesn’t really sound like a mixture of those bands, it’s more like a strange combination of old Solefald and old Beyond Dawn. Or is it? To be honest, I’m not sure what the hell this band is about, but at least it sounds interesting!

You don’t even have to know about the quest musicians (Kvarforth of Shining, Thebon of Keep of Kalessin and so on…) to notice the quality of this band. The songs are very versatile and there are lots of different styles to be found, from "Darkness’" rocking riffs to "A Force of Nature’s" Mörk Gryningish melodic but aggressive black metal. Saxophone is often used on the album, which makes the music sound quite… should I say classy.

FEN / DE ARMA – Towards the Shores of the End