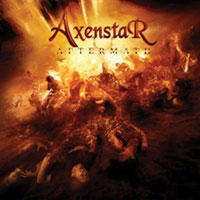 A welcome return to these ears, Vasteras Sweden’s Axenstar ends a studio silence of four and a half years with their fifth record "Aftermath". With new members Adam Lindberg on drums and Jens Klovegard on guitar, the quartet continue their fine brand of melodic power metal, focusing on stirring riffs, numerous musical and vocal hooks and the capability to know what their audience desire from their songwriting. These 10 songs just scream of pure power metal in the Finnish/ Swedish tradition, well in line with early Sonata Arctica and mid-period Nocturnal Rites – distinguishing itself with keyboards used for flavor and atmosphere versus pure arpeggio-laden heroics.

The band isn’t afraid to add in special distinct attributes to differentiate the normal speedy / addictive melodic vocal phrasings. For instance “A New Breed” during the verse transitions contains a Spanish bolero like musical passage between Magnus Winterwild’s keyboards, the guitar interplay and the drum movement. Then you have “Signs Of A Lie” which bursts out of the gate in a thrash gallop before the pacing navigates between mid-tempo power and fast blitzkrieg double bass and Adam cracking the snare as if he’s taken a 24 hour Red Bull drinking session at hand. Jens along with mainstay Joakim Johnsson form a symbiotic axe bond for "Aftermath" – dazzling the listener with an array of runs, harmonies and riffs that will make all traditional and power followers shout from the rooftops on exemplary songs such as “Dogs Of War” and the title track.

I will state that many may not favor Magnus’ natural nasal-like quality to his high range vocals, but I believe his personality and willingness to stay within his strength zone make up for any shortcomings. Overall this album rates right up there with 2005’s "The Inquisition" and should more than make up for their time away – as I believe not much of their brethren in the power genre can be as heavy while still writing catchy songs as Axenstar these days.