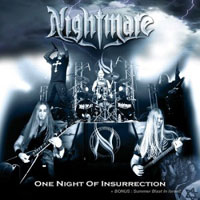 NIGHTMARE – One Night Of Insurrection

Celebrating their 30 year anniversary as a group, "One Night Of Insurrection" is a live record from their October 30 2009 show in Grenoble, France. The separate DVD contains the full show, this is a 12 song abbreviation of that special gig. NWOBHM influenced power metal is what you get, a sharp snare sound, Jo Amore’s confident vocals and much more energy given seven studio albums to grab from in the Nightmare catalog.

With five of the songs culled from their most recent album Insurrection (including favorite “Legions Of The Rising Sun”) Nightmare concentrate on their last decade of material with this release. Plenty of crowd chanting, special guests from previous lineups to relive their times with the bands – it’s a fun document of a special occasion in a band’s long career.

Based on their versatility, I’d be willing to check them out live if they ever got the chance to tour abroad. In the meantime, "One Night Of Insurrection" will suffice for my Nightmare fix.