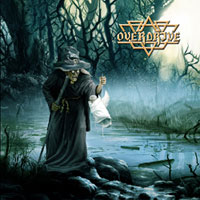 Kudos to Lion Music for their willingness to sign acts like Overdrive on a roster heavily weighing upon guitar shred dynamics. Do not fear six and seven string mavens – for Janne Stark and Kjell Jacobsson assuredly throw down knowledge, melody and theory throughout these 12 songs on their fourth album "Angelmaker". It’s just in the framework of a traditional, no holds barred heavy metal style – the one moving audiences during the early to mid 1980’s.

Surprises on this album include a heavier interpretation of the old 80’s Frida single “I Know There’s Something Going On” (where the guitar riffs take on the keyboard ambiance with much more ferocity), the Maiden-like “Back In The Village” type number “Under The Influence” and the closing 10 minute plus “The Wavebreaker” which opens with soft spoken melodies and acoustic guitars and then charges into Manowar meets epic metal with a twinge of Thin Lizzy madness.

Per Karlsson hits his comfort zone right from the start with “Signs All Over” – sustaining high pitch notes with a sincere metal personality that conveys anger and passion often at once. The rhythm section of bassist Kenth Ericsson and drummer Kenta Svensson keeps the bottom end locked and loaded, able to juggle from faster, double bass laden material like “To Grow” and “Cold Blood Chaser” to mid-tempo movers like “See The Light” or “Mother Earth” without any sign of struggle.

Overall Angelmaker fits in the class of efforts like Accept, Riot, Judas Priest and Iron Maiden – emphasizing strong hooks and searing solos with major concentration on the songs remaining distinct and king. This may not be one of the albums most would go searching for in the record bins, but believe me Overdrive have all the talent and credentials behind them to make you a believer within the first listen.