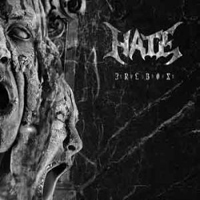 The Polish death metal machine Hate is in these days out with their seventh album. More progressive than ever and yet so Hate you want it. ATF Sinner and his comrades once again convince us that Hate is a band you have to expect being a part of the metal elite in Europe.

I doubted a bit on this album after my first listening, but it appeared as a small masterpiece as I got hold of the songs. As on the last 2 albums, it’s a little progress on all tracks. But, there may be a bit difficult to get hold of this in the beginning and demand that you hear the songs several times. Hate’s music becomes more and more complex and less brutal for each release, and for you as the listener, this means you need to use more time to get what Hate are doing. Their music is becoming less Polish, if I can say so.

There are basically two things that make Hate sounds like Hate. The first is of course the vocals from ATF Sinner. He really has a dark and powerful growl and I suspected that he has spent much of his childhood screaming in the Polish coal mines . At least it sounds like that. His voice is kind of a darker and a bit dryer version of Piotr "Peter" Wiwczarek (Vader) and that is the best description I can give. Pure fucking brutal death metal growling like no one else, there you have ATF Sinner.

The other characteristic is the distinctive riffs ATF Sinner and Destroyer part between them. On "Erebus" it may seem as if the riffs are somewhat slower than before, but I have a feeling that they are coming a tenth of a second later than you might expect them to come, and it makes the songs sound a bit slower than they actually are. The brutality is still there: it’s just that Hate has become more Hate than before and it is undoubtedly a good sign for the band.

"Transsubstance," the seventh song on the album is probably the one most of those who like brutal death metal will have the biggest problems to handle. It begins in a very surprising way with something I could easily have misunderstood as Hate, if I had not known that this is actually the same band. Long and repetitive parts only interrupted by some fragments with ATF Sinners distinctive vocals on top. And, the song ends just as surprising as it begins. But after listening to a lot of the "Erebus" I have learned to like "Transsubstance".

The last song "Luminous Horizon" is so much Hate as you can get it. It is fast and intense with blast beats in the beginning followed by a slower and really heavy middle section. The riff that begins at 3:10 is part of what Hate is all about; a repetitive slow riff with blast beast that progressivly changes into the song’s main riff.

The songs are more varied this time, without damaging the wholeness of the album. There are several tracks I could mention, but rather allows the selection of the best songs, worst songs and climax, etc. be up to you as a listener to decide. "Erebus" is a great album it needs some time before it reveals itself and after that it is worth every listen.