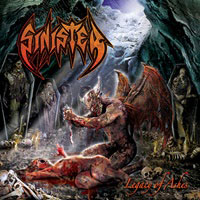 Dutch death act Sinister have been through numerous lineup changes through the years. At the forefront of the movement with their "Cross The Styx" debut, original drummer Adrie Kloosterwaard moved into the vocal slot when the band re-formed in 2005 and "Legacy Of Ashes" is their ninth studio album in their 22 year history. As a quartet this act has never been about clean melodies or accenting breakdowns – what you’ll get is pure adrenaline riffs, furious double bass/ blast beat intensity and occasional mid-tempo breather action where the guitars may give you the hooks and melodies one desires.

“The Enemy Of My Enemy” for instance builds off slight ominous guitar bends from Alex Paul and the subtle double bass tempo shifts of Edwin van den Eeden. “Anatomie Of A Catastrophe” opens with a cavalcade of tribal-like military rhythms not dissimilar to Sodom while Adrie roars his lyrics against the tide and a radio transmission overdub carries the refrain. The title track allows bassist Joost Van Der Graaf a chance to carry the lead, probably the slowest song on the album but still heavy in an older Obituary sense. My favorite song would be the aptly titled “The Hornet’s Nest” – a riff swarm that just attacks your brain from beginning to end and featuring more impeccable off time action from the bass/drum crew.

I believe God Dethroned and Hail Of Bullets have upped the ante of Dutch death metal in general, and Sinister fall in a category just below their output. Nonetheless, if you want your emphasis on heaviness and old school death metal philosophies, "Legacy Of Ashes" will assuredly receive the double horns salute.

STAR ONE – Victims Of The Modern Age