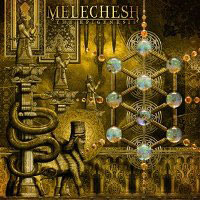 I feel like I am listening to "Blood Mountain" or "Bison B.C." for the first time, so unique. It appears to tell you a story through music rather than sell you a bunch of well-executed metal hits. Seems like it only makes sense heard as a whole.

Sound’s big but not huge. Thick, bassy, professional but not overwhelming, very orchestral. Similar to Nile from "Those Whom the Gods Detest", but of course Melechesh are Middle Eastern by birth, influences are more like personality, as with Orphaned Land.

As for "The Epigenesis" – a masterpiece of epic proportions. A metal album for the 21st Century metalhead bored with current trends. Where is metal going in order to survive? Melechesh way.

Some standouts: "Illumination – The Face of Shemesh", 8, very Nile-ish, Tool-ish with a guitar slide straight out of a technical Megadeth song. Melody and hooks present but they must reveal themselves to you and not at first listen. Song 9 I hear latter era Death, great original riffs, knack for it, track ends with an awesome one. Two Middle Eastern instrumentals straight out of the Middle Eastern street.

Album recorded in Istanbul, Turkey. This is one I highly contemplate buying on the original CD, whenever I get a job, that is. But first the U.S. must upgrade from a IIIrd world country it now is. Oh, sigh.