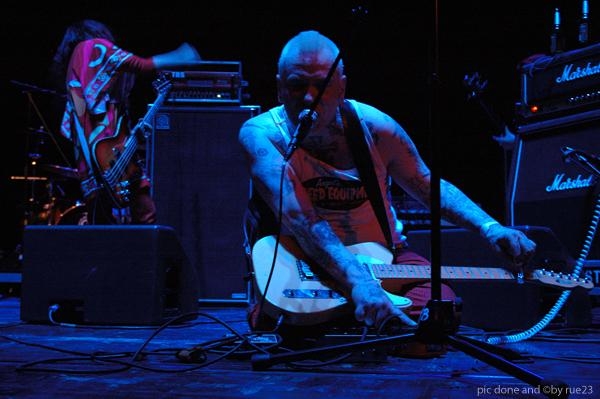 NOVA EXPRESS, the recently announced noise/darkwave/ambient project set up by SKITLIV front man Maniac (ex MAYHEM), has undergone a name change.  The band, comprising Maniac himself on vocals and guitars, GALLHAMMER'S Vivian Slaughter on bass, sax and backing vocals, and SKITLIV guitarist Ingvar on guitars, will now be called SEHNSUCHT.

Commenting on the name change, Maniac's manager said "As the song writing progressed, the name NOVA EXPRESS didn't quite seem to fit the atmosphere Maniac and Ingvar were creating, so really it was a case of finding one that better suited what everyone in the band were setting out to ultimately achieve. The word "SEHNSUCHT" seemed much more appropriate and we decided to go ahead and make the change now, rather than wait until we get further down the road, when a name change would become more complicated".

The band is already signed to the UK's Cold Spring label and work on SEHNSUCHT's first album, which has a working title of "Narrow Birth", is expected to be completed at the end of this year.

Maniac will also shortly be completing work on the first SKITLIV album "Glem Aldri Korset".  Aside from Ingvar, the Doom/Black/Noise project includes SHINING's Niklas Kvarforth on guitars and sculptor Spacebrain on bass.  The difference between the two bands was recently described by Maniac's manager: "Where SKITLIV is very much Maniac's unpredictable offspring, the band is all about extremes and expecting the unexpected, SEHNSUCHT, on the other hand, is its more thoughtful, introspective, sibling".

A track by SEHNSUCHT can be heard on the band's official MySpace page at www.myspace.com/sehnsuchtofficial. "Immaculate Fix", which includes eerie backing vocals by CURRENT 93's David Tibet, is un-mixed and un-mastered and is still missing Vivian Slaughter's input.