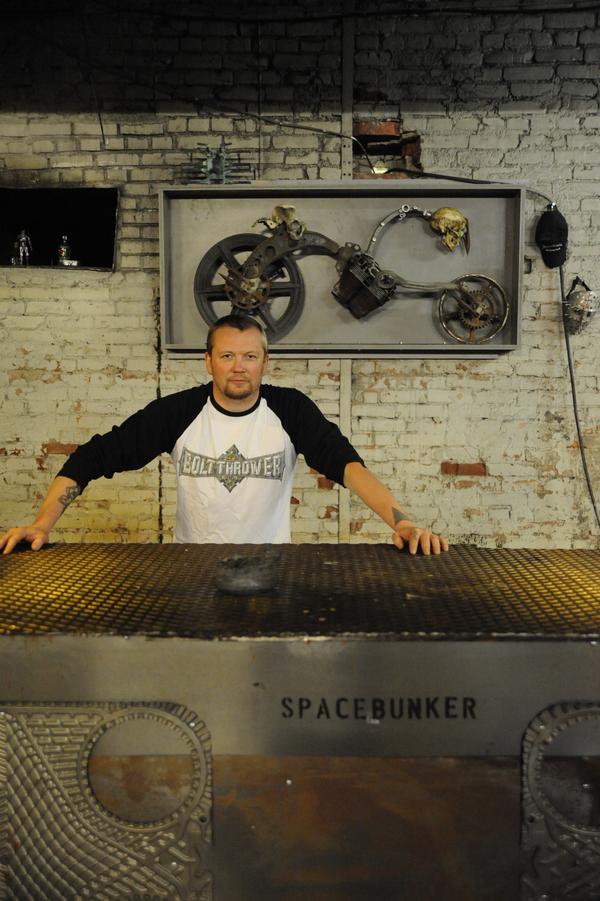 Sculptor René M. Hamel, better known as Spacebrain, and famed for his designs for bands such as MAYHEM and RED HARVEST, as well as for Maniac's SKITLIV, the band for which Hamel plays bass, has converted his studio into a music and function venue, which he has called "The Spacebunker".  Information and pictures of the Spacebunker can be found on MySpace at www.myspace.com/spacebunker.

The Spacebunker covers an area of 300 square meters and has a stage that is much larger than average for this type of venue. Located in Grunerløkka district of Oslo, Norway, the venue is unique in that Spacebrain has displayed his sculptures and stage props round the walls and raised areas allowing fans to get close to some of the items that have now become as legendary as the bands that used them on stage.

Hamel did a "trial run" for the venue during Oslo's Inferno Festival this year, when he hosted a special free event with performances by SHINING and SKITLIV, and has held a few more events since then.  The Sculptor commented, "The first gig was something else.  We had never done anything here before, and the heating broke down, so it was freezing cold.  But the audience reaction was incredible despite the cold.  Some were saying that they enjoyed it more than the official events, because of the atmosphere and because of being able to wander round and meet various musicians and get close to the sculptures themselves. The ashtrays were particularly popular, they were all my designs, and I don't think we had one left by the time we all went home that day!

"It really encouraged me to develop the venue further though.  The acoustics are excellent, and I've upgraded the bar and facilities, and of course fixed the heating, and the bands appreciate the fact that they have a huge stage area.  I also decided to offer the Spacebunker for corporate events, parties etc., which might sound like a strange mix with its use as a venue for bands, but we've found that the sculptures give the companies a more interesting setting for their clients than the usual bland hotel venues".

Anyone wishing to find out more about the venue, or Spacebrain's sculptures can contact him directly on trash@spacebrain.no.