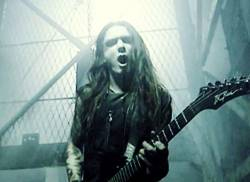 Polish blackened death metal hellions–HATE –have finally announced a long expected video for the song “Threnody”! The material has been shot in Silesia (southern part of Poland) in a real coal mine. Directed by Maciej “Dombro” Dąbrowski and co-produced by Krzysztof Kotlarski, the video is the first official clip from HATE ever! The material will be shown exclusively on a Polish portal www.onet.pl (Music Department) for one week and later posted on myspace and youtube. The video will also be added as a special bonus to American version of “Morphosis” album, which is going to be distributed in the US by Koch International soon. More news on this to come soon!

We are proud to inform you that HATE have lined up several important festivals that are gonna be great occasions to promote the new material “Morphosis” across Europe! It’s just the beginning of HATE’s concert compaign promoting “Morposis” as the band is working on a regular Euro tour that is to come later this year. We will provide you with more info on this very soon! NOTE that HATE will play as a direct support before Gorgoroth on Metal Heads Mission Fest in Crimea/Ukraine on the 6-th of August. http://mhm-fest.com/  Do not miss that!

Be sure to visit www.myspace.com/hatepoland  to view their complete touring itinerary.

HATE’s guitarist Destroyer has broken his arm during the band’s tour (Metal Spirit Resurrection) in Russia that lasted from April 22 to May 1-st. The accident happened in the middle of the tour. The guitarist was taken to hospital and his arm put in a plaster cast. In spite of this unfortunate situation, HATE have decided to continue as a three-piece until the end of the Russian tour and later played their Polish tour and performed on Neurotic Death Fest/Holland as a trio as well. Destroyer’s recovery is coming to an end now, so the band will soon perform as a quartet again!