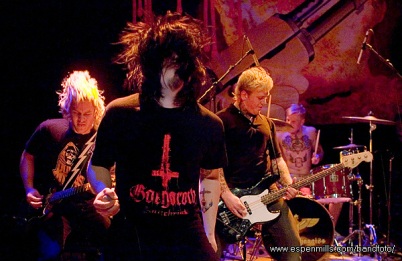 KVELERTAK, whose members believe their music should be a pretension free zone and not limited by restrictions placed on the band by any particular genre, is set to release its first demo.  Entitled "West Coast Holocaust", in reference to the part of Norway in which the band is based, the demo will contain 10 tracks.

The band has rapidly grown in popularity, and has already attracted the attention of a couple of major labels; due in part to the lively performances, and in part to the effort that has been put into creating a sound and image that is very recognisably "KVELERTAK".  The band preferring to design all their own artwork, and record and produce the music themselves in order to achieve exactly what they were aiming for.  Yet despite producing music that is immediate and easy to like, the band has somehow managed to retain a darker, harder edge.

Aside from the demo, the band have also made 8 tracks available for free download at http://www11.nrk.no/urort/user/?id=61911; and in keeping with the philosophy that their music is there to be enjoyed, KVELERTAK are giving away a free copy of the demo to the first 10 people who message them on their MySpace page at http://www.myspace.com/kvelertak.